MARCH FINISHES WITH A FAMILY AFFAIR

Well the year rolls on and we are now into April and two months of the fishing season have already passed. Catches picked up somewhat during March but this would be expected as historically it was always a better month than February. We finished with a total of 11 fish for the month. The fish seemed to come in batches as there would be a few successive days with fish being caught and then a lull and then we’d be off again

The weather was typical for March, in other words we got our fair share of everything. Total rainfall was 276.05mms (10.87”) which is the most we’ve had for a month since September of last year. We also had highs of 18.4 degrees C and lows of -3.8 degrees C, so a bit of everything in other words. Water levels followed the weather patterns with the gauge varying from 100 to 25.

As I said earlier the fish seemed to come in batches as we had 6 fish between the 9th and the 14th and the remainder from the 21st till the end of the month. Rudi Groener had the first of the month on the 9thfrom the Whin of 7lbs5ozs. Werner then had two on the 10th from the Horseshoe and the Waterfall. Yvonne had a fish on the 11th from Cooleens. Michael Wymes had one from the Rock Pool on the 12th and Martin Davison had another from the Rock on the 14th.

There was a lull then till the 21st when Arne Forsgren had a fish from the Meadow followed by Lars Markgren on the 22nd also from the Meadow. Michael Fehringer from Austria on his first day’s salmon fishing landed his first ever on the 27th from the Waterfall of 10lbs12ozs on a Cascade.

Our last fish of the month was a real family affair as Marcel Dittrich landed the first fish off Finlough, with his wife Lucia and two children Anna and Markus in tow on the last day of the month. The fish weighed in at 7lbs10ozs and was taken on a Delphi Collie. There was lots of excitement in the boat as the fish was almost as big as Markus. Well done to all.

Werner got April off to a flying start with a fish on the 1st from the New Island Pool. It weighed in at 7lbs7ozs and was taken on a Delphi Collie. Hopefully our new anglers can keep the fish coming in. Water levels are now at 30 and there is some rain forecast tomorrow which should keep levels up for a few days. D.McEvoy 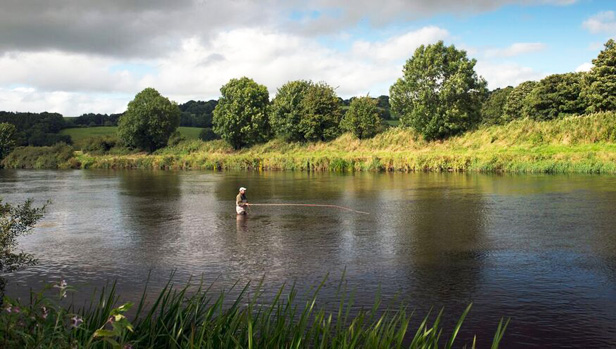