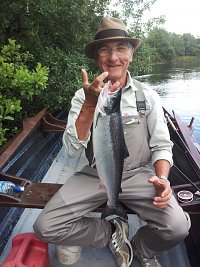 The first week of the month was quiet with just 2 fish recorded.

On Monday the 6th we saw a much needed rise in water and over the course of the week 19 salmon were taken, these were mainly small grilse (on the Moy the early grilse tend to be small and subsequent rises in water bring in the larger fish).

Week commencing 13th July saw 17 salmon taken, with a noticeable increase in size, the majority weighing between 4 and 6 lb.
Week commencing the 20th July brought with it increased water levels and the best run of the year to date. In all 69 fish were taken, the 21st was a bumper day with 23 fish to 8lb in weight being recorded.

During the last week high water on 27th curtailed the fishing with only one grilse taken, despite this during the last 4 days 57 grilse were caught.

Roger Morris Party (England) had 17 salmon for 4 days fishing. This included a 6.5 lb fish on fly for Tim Jessop.

Dr Klaus Winter (Germany) caught his first salmon. This was a fresh grilse of 6.5lb taken on fly from the Wallpool.

Garry Perks and Mike Hornsby had 32 fish for their week (14 returned).

Mark Geesink and Paul Vanerkemp (Holland) had salmon of the Mount Falcon Fishery, The Ridge Pool (6 on fly), Carramore Lake and The Owenduff during their 3 Rivers Fly Fishing Package.